A collection of my thoughts 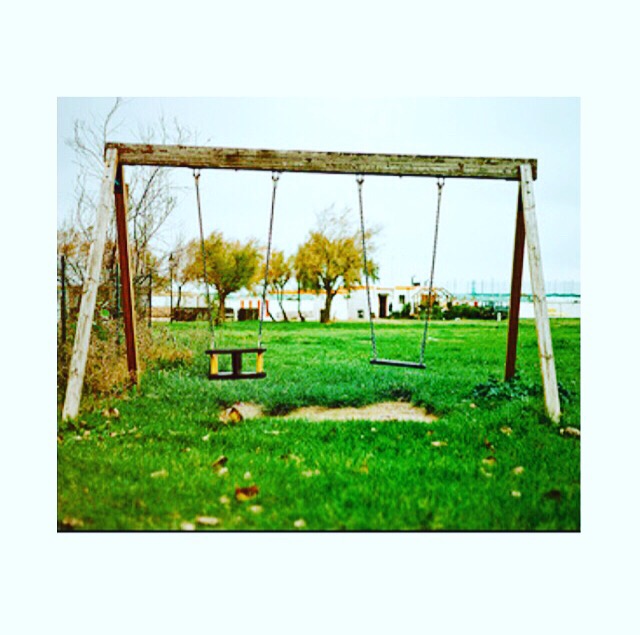 The deathly creaking of my joints persist, I can resist the pressure no longer. With a heavy groan, I come undone. Nut loosening from bolt, screw loosening from chain, my metal frame loosening from the soil I had sunken my base into many years before. The strong grassroots bound tightly around me can no longer support this feeble metal structure of mine.My weary parts tumble majestically to the ground, and I heave a sigh of relief as he runs towards me. He frets, disgruntled; a pained look in his eyes. If only I could console him, I’d put an arm around his shoulders. But alas, I have no arms, only chains that now lie limp on the ground.

If only I could speak, I would remind him of the breezy morning, when, under the 10 am summer sun, I saw freckled cheeks, floppy hair, and the happiest smile bounding towards me as the sheet that covered me was unfurled.

I remember the little gasps of wonder that escaped him as he ran his tiny little hands ran over the fresh coat of paint that covered me. He marvelled at the shiny rings of metal that held me up, his little brow creased into a frown as he concentrated, trying to figure out how they interlinked so seamlessly.

I can still hear the echoes of his fits of gleeful giggles, his resounding happiness as I strived to push higher, bringing the tips of his little fingers just a teensy bit closer to the puffy clouds that floated across the sky.

I shone with pride, moving back and forth in high arcs as he showed off his shiny new toy to all the little boys and girls in his class.

I was a part of many a family picnic and photo, and privy to the late night talks he often had with his father.

I wonder if he remembers the sound of my creaking hinges carefully masking the sound of his footsteps as he snuck into the house after a rather late night; or if he knows that it was I who gently propelled him forward so that the distance closed between the pretty girl and he, allowing him to peck her on the cheek for the very first time.

I wonder, I wonder.

Oh how I wonder if he ever did miss the lonely old swing set in his backyard, for I remember those days very clearly too.

I recall the feeling of panic and bewilderment as the same white sheet was draped over me again, and having to forcefully reassure myself that he would be coming back soon. That this was just temporary, it had to be.

Many, many lonely days followed, my only companion being the rust that slowly spread through me. I was helpless against its cancerous clutches, and had all but given up hope.

I suppose it was fate that brought him back at the time that it did, and so after all these years I was confronted with a man, whose smile, freckles, and floppy hair hadn’t changed one bit.

His large hands skimmed over my chapped paint and distorted chains, and every part of me squeaked in frustration; for I could not point out the forgotten nooks and overlooked corners during my repairs, where my disease still triumphantly loitered.

I tottered under the burden of his baby girl, and I succumbed to my old age, as was inevitable; unable to bear it any longer.

I chuckled at sight of his wife stopping short as she regarded my lopsided form, a large box containing a new swing set at her feet.

“Well it seems I won’t have to spend hours convincing you to replace it, like I thought I’d have,” she laughs.

Oh the irony. It seems that I chose just the perfect moment to give in.